Welcome to the AfterBurn website! An all firefighter Rock group from Long Island, New York, our music contains elements of the three essential music genres; Rock & Roll, Classic Rock, and Hard Rock! With a dash of blues and alternative metal for extra flavor! Our music comprises some of the most harmonious & melodic headbanging songs on the planet. Dig beneath the surface and you will discover that our unusually soulful music is about having a good time, celebrating life through music, and living every moment to it's fullest. We serve as a living testament that you will live through the struggle, and come out on the other side stronger, with AfterBurn music playing loud and proud! 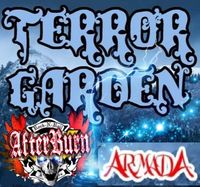 Terror Garden with AfterBurn & Armada at The Village Pub

Terror Garden Headlines with AfterBurn on at 9pm $10

New York Rock and Roll Firefighters, AfterBurn, are an all firefighter band that embody elements of rock, alternative & metal, with catchy melodies, inside some of the most harmonious, headbanging music on the planet. Dig beneath the surface and you will discover that AfterBurn's unusually soulful music is about bringing hope, belief and awareness.

AfterBurn was started by FDNY firefighter Joe Martin in 2010, followed soon after by brother firefighter Rich Appenzeller, in remembrance of our 343 brothers that perished on 9/11/01. Mathew Sebel and Chick Satterley joined the AfterBurn family in 2016. AfterBurn serves as examples themselves that you can and will live through the struggle, whatever it may be, and come out on the other side of it stronger.

AfterBurn started by bringing together a handful of multi-talented firefighters, each with a fistfull of musical influences and tastes. The band started by performing in local clubs, bringing a fresh but classic sound with an energetic live show.

2012 the band was chosen to perform in Austin Texas for the Texas Rockfest stages during the SXSW music festival for the first of three consecutive years.

In June, 2014, AfterBurn's first full length LP, " Never Forget" was released.  In August , AfterBurn performed in the direct support spot in NYC for Faster Pussycat. At the end of the set, they were invited by the FP band to tour with them that Fall, beginning on Halloween at The Whiskey A Go Go, doing 22 shows in 25 days, and ending in Chicago just before Thanksgiving.

Keep an eye out,  your friendly neighborhood Rock N Roll Firefighters  will be coming to your Area soon!

NO GUTS NO GLORY

AfterBurn's first release since 2018, our new single " No Guts No Glory"